No singular artistic work represents the face of Nigeria’s rich and vibrant culture in its majestic splendor more than the Festac Mask.

The Mask has its deep roots in the ancient city of Benin in Edo State of Nigeria, and can be traced to the expansive conquest of Queen Idia, who during her reign, extended the frontier of what is known as Ancient Benin Empire to unbelievable heights and wide geographical reach. Queen Idia’s son Oba King of Benin, is said to have commissioned the mask in honor of his mother and her contribution to the success of his reign. 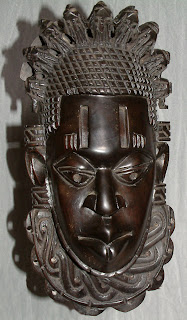 The work in all subtlety represents the esoteric beauty of the Queen complete with all the royal pomp and pageantry. The reign of the Oba, King of Benin was in the 16th Century and covered the arrival of the Portuguese’s in Nigeria. It is very interesting to see the depiction of the Portuguese displayed prominently on the crown like headdress of the queen. It could be imagined that the King was showcasing the fact that he was such a skilled and powerful ruler that he even had dealings with foreigners. This gives us an interesting insight as to what it my have been like when the first Portuguese explorers appeared in Benin city and maybe the importance that may have been bestowed on them. It’s quite poignant that all of this initial contact ended in the enslavement of the Nigerian people, first as slaves shipped out of their country, then as subjects of the empire. 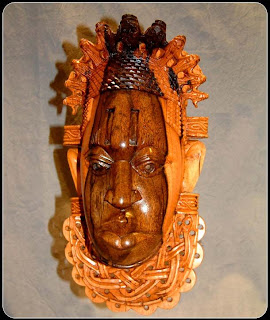 It is quite ironic then that the Festac mask has been in the centre of a thought provoking discussions about Britain’s role in the looting of art and other treasurers from Africa. It been argued that the mask was stolen from Nigeria during Britain’s colonization of Nigeria and should therefore be returned back to the Nigerian people, and until it is returned Nigerians are being denied the right to view the arts of their ancestor; it has been further argued that the steadfast refusal by international museums such as the British museum has resulted in much of the evidence of the striping of African through the plundering of their wealth and arts being hidden away in dusty museum archives and in some cases ending up in private collections. This act in some sense denies Africans of their heritage; the art and artifacts, which would give them an insight into what it was like for Nigerians in the 16th century and previous to that.

I actually went to the British museum to see the Festac mask and was surprised as to how small it actually was. You could clearly see where it had been repaired but this didn’t distract from the elegance and beauty of the mask and the skill of the craftsmen. The mask was in the lower basement section of the museum, a section dedicated to African art and artifacts. It was interesting to see this artifacts that was so loved by the people of Nigeria that it was actually used as a symbol for the festival of Art and Culture in 1977 and was hailed as a symbol of Pan Africanism. Looking around at the displays, I wondered if the African art exhibition was a predatory statement of a conqueror showcasing the wealth of the country they had plundered and conquered or was it simply there as a way of educating people, an attempt to showcase the art and talent of African artists and bringing it to a wider audience. If this was indeed the case, could the museums and others like them not now simply return the plundered artifacts back to the countries they were stolen from and then enter into a loan agreement with theses countries so that they could still showcase some of the items? Or is this too naïve a view? I am sure that this is a discussion, which will continue for sometime. 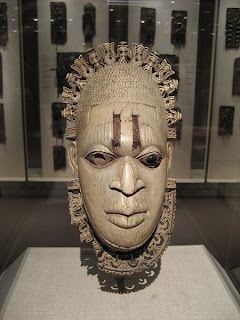 Regardless of all my hypothesis, thoughts and opinion, the fact remains that the Festac mask was indeed a worthy tribute to the queen who was an art patron that encouraged creativity as much as their valiant pursuit of conquest. This beautiful masterpiece is a constant reminder of the richness of the past, the quest for excellence of the present and the vision of the future for Nigerian people.